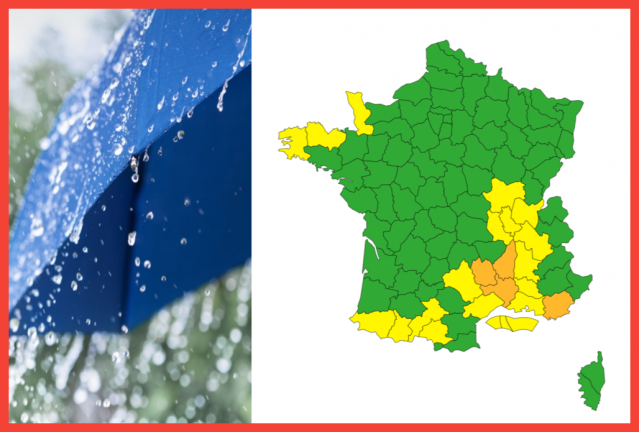 The Var was placed this morning (October 30) on orange vigilance for heavy rains and possible flooding. It joins the Gard, LozÃ¨re and ArdÃ¨che, which were placed yesterday in orange vigilance by MÃ©tÃ©o-France.

The meteorological service highlighted the intensity and duration of the rains forecast in the four departments as a particular concern.

The alert for departments will remain in place at least until tomorrow morning (October 31).

#vigilanceOrange Heavy accumulations of precipitation over the CÃ©vennes with a risk of significant flooding upstream of the CÃ©vennes basins. Heavy stormy rains expected in the Var, in particular the coastal areas.
âš ï¸Be vigilant and stay informed https://t.co/w5OGXbEEhP https://t.co/MjyYDBVGTT

For the other three departments on orange alert, precipitation of the order of 20 to 30 mm per hour should fall during Saturday morning. This should subside by mid-afternoon today.

The rain is expected to continue on Sunday and Monday in these three departments, but it will be lighter.

Should I do something though in these areas?

In the event of an orange weather alert, local residents should stay away from bodies of water and low areas and instead move to higher ground or an upstairs room.

You should avoid going out if possible, but if you are driving you should not start on a flooded road, even partially.

Don’t go down into cellars and basements, and make sure you keep abreast of the situation as it develops.

Biden says US ‘will always be there’ for France