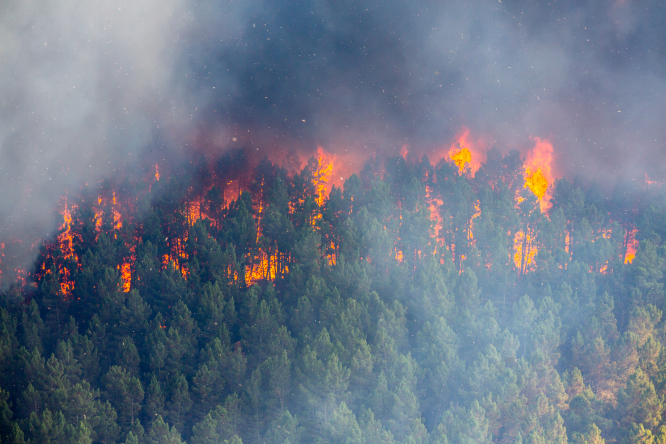 Thousands of people evacuated as wildfires rage in southwestern France

More than 6,500 people have been evacuated as two forest fires, which started yesterday afternoon (July 12) and have since destroyed 1,400 hectares of land, continue to rage in Gironde.

The fires, located near Landiras, 40 km south of Bordeaux, and La Teste-de-Buch near the Dune du Pilat, the largest sand dune in Europe and a tourist hotspot on the Atlantic coast, are still active.

LIVE – “Immense” damage, 1,700 hectares gone up in smoke on the two ongoing fires in Gironde (here in Guillos, near Landiras)
➡️ https://t.co/XctTyXMbtg pic.twitter.com/gIdRJOFLjr

No local residents or holidaymakers were injured at this stage, although two firefighters were taken to Center Hospitalier de Bordeaux for treatment for smoke inhalation.

The fire near La Teste-de-Buch is believed to have started after an electric vehicle ran into trouble on a wooded road.

Several Canadair and Dash planes are currently carrying out water drops to try to put out the fires, and a total of 800 firefighters are mobilized, with reinforcement crews from Haute-Garonne, Gers, Charente, Charente-Maritime and Lot coming to lend a hand. their Girondin colleagues.

The plume of smoke from the Landiras fire is visible from the Bordeaux ring road. Firefighters said the fire is raging “over difficult terrain”, with a “swirling wind” complicating response operations.

#Forest fires on La Teste-de-Buch and Landiras: at nightfall, the 2 #Dash and the 2 #Canadair engaged carried out nearly 50 drops. 320 firefighters remain mobilized tonight to deal with the flames. A reinforcement column is expected tomorrow morning. pic.twitter.com/RyVGmXApLt

The evacuated population includes 525 inhabitants of five hamlets around Guillos and Origne, on the edge of the Landes de Gascogne Regional Natural Park, who are housed in a communal hall in Louchats and La Brède.

“I no longer have any inhabitants in the town”, declared the mayor of Guillos, Mylène Doreau. “When I saw the fire approaching the houses and I had to evacuate people who didn’t want to leave their homes, that was something. Everyone has cats, dogs, chickens and wanted to save everything.

“They [had to] get ready in such a rush.

A #LaTestedeBuch several thousand holidaymakers evacuated overnight from campsites are welcomed to the Parc des expositions. Supported by the @Red Cross
@GalandElise pic.twitter.com/zgrveS4BJr

The fire around La Teste-de-Buch led to the evacuation of five campsites and more than 6,000 campers and motorhome owners, who were taken to a nearby exhibition center.

“The wind shifted during the night. And even if the flames are very far from the campsites, the decision was made to evacuate them at night and this operation was completed around 5:00 a.m. this morning,” David Annotel of the National Federation of Firefighters of France told BFMTV.

“It’s an area that can easily be blocked off and with the temperature [today] it was preferable to evacuate in the early morning rather than during the day.

Motorists should be aware that departmental roads 115, 125 and 220 are closed around Guillos, Origne and Landiras, and that the D128 is closed between the Dune du Pilat roundabout and Biscarosse beach.

#fire a #TheTest : the RD 218 is closed at the level of the Dune du Pilat in the direction of Biscarrosse in order to facilitate the evacuation of campers.

Uber files: Macron defends his relations with the company after a leak