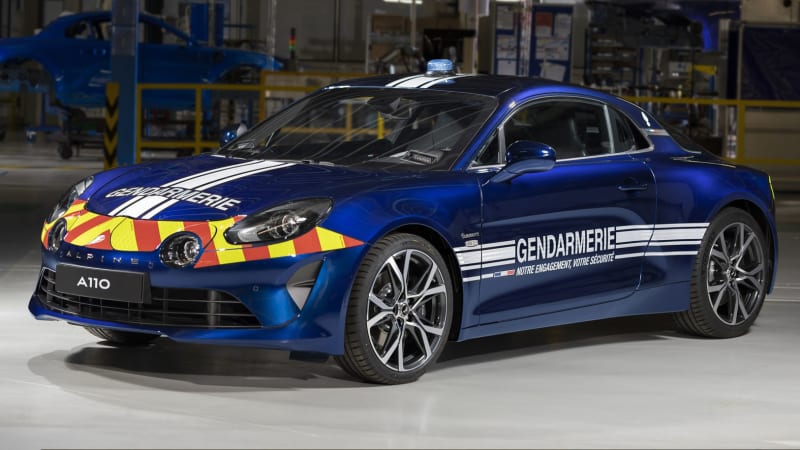 Like the original model, the current generation Alpine A110 enlisted in the French gendarmerie. French military police have ordered 26 copies of this small, lightweight coupe which will be modified to help law enforcement catch motorists with a serious need for speed.

Government officials explained that they chose the retro-styled coupe because it is quick and nimble to drive, although the fact that the gendarmerie has historically used Renault-badged cars for its high-speed operations certainly did not. not hurt Alpine’s chances. Alpine will build the police cars on the same assembly line in Dieppe, France, which manufactures the civilian variant of the A110 (and which manufactured the original model between 1963 and 1977). However, the 26 units will stop at a French outfitter called Durisotti before being deployed on French roads.

There they will receive the changes required for law enforcement duty. Some of the changes made include gendarmerie-specific graphics on the body panels, additional lights, sirens, a second touchscreen attached to the dashboard, and a screen mounted behind the rear window that displays instructions (“follow us “, for example). There don’t appear to be any mechanical changes, which means the power comes from a center-mounted 1.8-liter four-cylinder engine tuned to develop 252 horsepower and 236 pound-feet of torque. It turns the rear wheels via a seven-speed dual-clutch automatic transmission (a manual gearbox is not available). Hitting 60 mph from a standstill takes about 4.3 seconds, and the 2,500-pound coupe’s top speed is electronically limited to 155 mph – thankfully, as are many new performance cars.

Renault also offers a 292 horsepower version of the turbo-four, which is standard on the A110 S, yet the Gendarmerie was satisfied with the less powerful engine. We believe this is because the performance boost is not as impressive as it looks. The S is only about a tenth of a second faster at 60 mph, an almost imperceptible difference in real conditions, and its top speed remains fixed at 155 mph.

It seems that none of the 26 copies ordered will lead a boring life. Some will be assigned to rapid intervention brigade (BRI; high speed intervention brigade) whose mission is to catch up with motorists greatly exceeding the speed limit. We’re not talking about five on a country road; we mean 150 mph between Salon-de-Provence and Lyon. Others will participate in various missions related to traffic or public safety (they may find themselves in a high speed chase, for example), and two will be reserved to train new officers assigned to the BRI.

Alpine has started building the 26 cars and deliveries will begin in early 2022. If you’re visiting France next year, don’t say we didn’t warn you.

The French gendarmerie has long used hot-rod Renault (and related to Renault) models to catch speeders and criminals. Above, the original A110 was one of the BRI’s first patrol cars; it traveled the roads of France in blue livery from 1966. It passed the torch to the A310, its future successor, in 1973. The gendarmerie then bought a series of Renault cars including the 18 Turbo, the 21 Turbo and the MÃ©gane IDE. The department’s current fleet includes several examples of the MÃ©gane RS, a hot sedan with a power of up to 300 horsepower.

Renault does not however have a monopoly on BRI orders. The list of cars previously used by the department also includes the Matra Djet (which has been replaced by the A110), the Maserati-powered CitroÃ«n SM, the Peugeot 405 T16 and, more recently, the Subaru WRX.