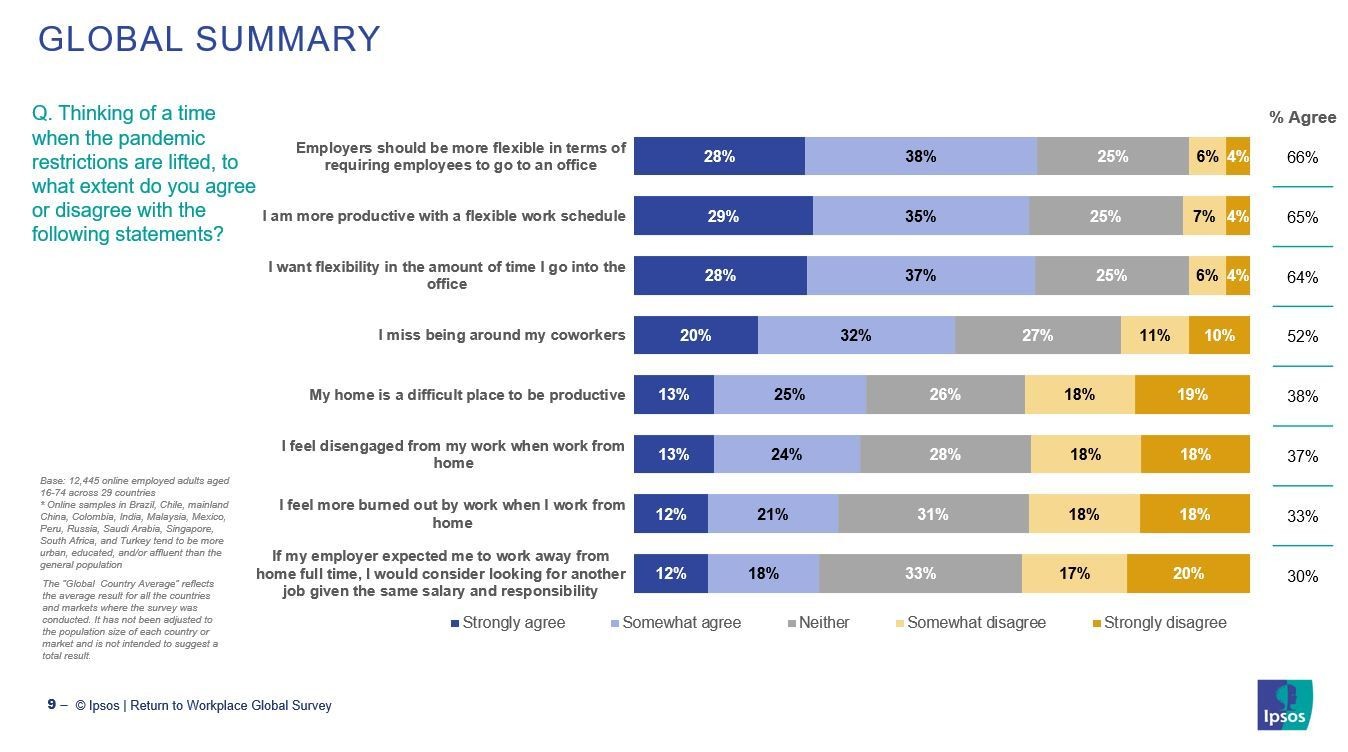 There have been many predictions that the COVID-19 pandemic will permanently change the world of work. This is exactly what happened, according to a new global survey, with a majority of people around the world saying they want to continue working flexibly from home.

An Ipsos survey for the World Economic Forum of 12,500 working people in 29 countries found that a majority want flexible working to become the norm. And nearly a third (30%) said they would consider looking for another job if they were forced to return to the office full-time.

The survey also questions a number of dire predictions about the effects of remote working. Experts have warned that people will miss their colleagues, be less productive and burn out – but the survey finds only minority support for these views.

Just over half of those surveyed missed their colleagues, 64% said they were more productive with a flexible work schedule, and only a third complained of burnout. Only one in three respondents said they felt disengaged from work when working remotely.

But a majority (66%) said employers should allow more flexible working in the future. Support for greater flexibility was strongest among women, parents of school-aged children, adults under 35, and those with higher levels of education and income.

The percentage requesting more flexible work was roughly similar among people with children under 17 (68%) and those without children (63%). But not everyone in the survey wanted to work from home all the time.

Office nine to five anyone?

Globally, a quarter of people want to work in the office five days a week once the pandemic ends, with the strongest support in Mexico (40%). More than a third of people in South Africa, Saudi Arabia, Peru, India and the United States also want to come back five days a week.

Investigation highlights shift to remote work caused by COVID-19. Before the pandemic, 53% said they worked mostly or always in an office. At the time of the survey, carried out between May 21 and June 4, 2021, this figure had fallen to 39%.

The extent to which people work mostly or entirely from home varies considerably across countries, ranging from at least half of those surveyed in South America, Malaysia, Singapore and South Africa to 21 % in Russia and only 15% in China.

Before the pandemic, less than a quarter (24%) worked primarily from home globally. Today that number has risen to almost two-fifths (39%) and an additional 22% are working outside their home but not in an office. Three-quarters (76%) who now work from home say it is a consequence of COVID-19.

While a majority wish to retain the work flexibility they were granted during the pandemic, many believe it is inevitable that they will eventually return to the office. More than a quarter of people (27%) think it will happen within six months and 24% within a year.

Almost half of teleworkers in France, Saudi Arabia, the Netherlands and Hungary plan to return to the office within six months.

However, a third or more of workers in Australia, South Africa and the UK do not expect the world of work to return to the way it was before the pandemic – a view shared by almost a fifth (18% ) of the global workforce.

The first global pandemic in over 100 years, COVID-19 has spread around the world at an unprecedented rate. At the time of writing, 4.5 million cases have been confirmed and more than 300,000 people have died from the virus.

As countries seek to recover, some of the longer-term economic, trade, environmental, societal and technological challenges and opportunities are just starting to become visible.

To help all stakeholders – communities, governments, businesses and individuals understand the emerging risks and follow-up effects generated by the impact of the coronavirus pandemic, the World Economic Forum, in collaboration with Marsh and McLennan and Zurich Insurance Group , launched its COVID -19 Risks Outlook: A Preliminary Mapping and its Implications – a companion for policymakers, building on the annual report of the Global Risks Forum.

Businesses are invited to join the Forum’s work to help manage identified emerging risks of COVID-19 across sectors to shape a better future. Read the full COVID-19 Risk Outlook: A Preliminary Mapping and Implications report here, as well as our impact story with further information.

The views expressed in this article are those of the author alone and not of the World Economic Forum.