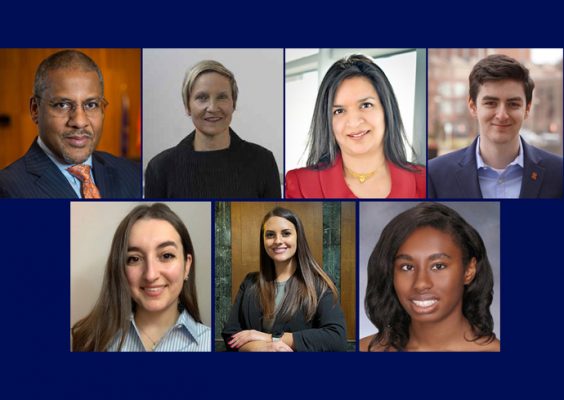 Student representatives on the board of directors have been appointed

Alexis Telga L’23, a third-year law school student, was named law student representative on the board, and Dylan Blaine France ’24, a junior majoring in finance at the Whitman School of Management and a minor in global political economy at the Maxwell School of Citizenship and Public Affairs, was named one of two undergraduate representatives on the board.

These student representatives are joined by Academic Dean’s Representative Craig Boise, Dean of the Faculty of Law; faculty representative Lori Brown, professor of architecture and director of diversity, equity and inclusion at the School of Architecture; and Staff Representative Maithreyee (Mai) Dubé ’96, ’16, G’17, who leads the enrollment team at the D’Aniello Institute for Veterans and Military Families (IVMF), as as representatives on the Board of Directors for the 2022-23 academic year.

These campus community representatives share their diverse perspectives and ideas with the Board and its various committees and serve as critical voices to help the University implement strategic goals in support of its mission and vision.

Boise came to Syracuse University in 2016 as Dean of Law and Professor of Law, bringing extensive experience in academic leadership and a passion for innovation in legal education. During his years as dean here and at Cleveland State University’s Cleveland-Marshall Law School, he created one of the two largest online hybrid JD programs in the nation, the first online joint JD/MBA, one of the first master’s programs in legal studies for non-lawyers, the first incubator for independent practitioners based at a law school in the country, and a “risk-free” JD program granting a master’s degree in law to students who choose not to pursue a career in law after successfully completing their first year of law school.

Brown is an architect, professor of architecture (since 2001) and director of diversity, equity and inclusion at the School of Architecture. Prior to teaching, Brown worked as an architect in New York and remains focused on the relationship between architecture and issues of social justice, particularly gender and its impact on spatial relationships. She co-founded and leads ArchiteXX, a women and architecture group bridging academy and practice, which encourages, mentors and creates opportunities for female architects, designers and students of all ages.

Brown received a Bachelor of Science from the Georgia Institute of Technology and a Master of Architecture from Princeton University. She recently received the Architectural League’s 2021 Emerging Voices Award, given to individuals and companies with distinct design voices that have the potential to influence the disciplines of architecture, landscape architecture and design. urban. Brown was elevated to the College of Fellows of the American Institute of Architects (AIA) in February 2022.

Dubé leads the IVMF enrollment team, working with program managers and field partners to assess the entrepreneurship, education, and training needs of veterans and military family members in order to identify the best programs to help them transition from service to civilian life.

Prior to joining the IVMF in October 2015, Dubé worked at Syracuse University’s School of Education for three years in the teaching and leadership department, managing twelve graduate programs.

Previously, Dubé worked with New Horizons of Syracuse and Rochester where she was responsible for developing and facilitating leadership and professional development courses. She has also worked in the financial services industry as a senior learning and performance specialist and banking officer. She currently sits on the board of the Gifford Foundation.

Dubé holds a bachelor’s degree in psychology, an MBA from the Whitman School and a certificate of advanced studies in conflict resolution from the Maxwell School.

Bruen studied political science and political studies at the College of Arts and Sciences and the Maxwell School and served a second term as student union president. Bruen previously served as assembly chair as well as chair of the student union elections board. Bruen is also a Phanstiel Scholar and has been deeply involved in local politics in his hometown of West Nyack and Rockland County, New York. He interned with his state senator and congressman, fueling his passion for public service and government. In 2017, he obtained the prestigious rank of Eagle Scout, having participated in scouting from the age of 6.

Dhaoudi is a fifth-year Ph.D. Candidate of Chemical Engineering in the Department of Biomedical and Chemical Engineering. She is in her second term as President of the Graduate Student Organization (OSG), having previously served as OSG’s Controller and Financial Secretary. Dhaouadi is a Tunisian international student who lived in the United Arab Emirates before coming to Syracuse University. She transferred from the American University of Sharjah to the United Arab Emirates in 2015 as an undergraduate student in chemical engineering, graduated with a bachelor’s degree in 2017, and then enrolled for a doctorate. program in 2018. She conducts research in Professor Dacheng Ren’s lab with a focus on understanding persistent cells residing in biofilms and their involvement in resistance of chronic bacterial infections.

Telga is a third-year law student at law school. She is a student lawyer at the Transactional Law Clinic and a teaching assistant in legal communication and research for Adjunct Professor Kristen Walker. She is also the administrative editor of the Journal of International Law and Commerce.

As the Law Student Representative on the Board of Trustees for the 2022-23 academic year, Telga will participate, ex-officio, in the Academic Affairs and Enrollment Committees of the Board of Trustees and the Experience Committees. student and will report to the board at meetings of the executive committee and the full board. .

France is a junior majoring in finance at the Whitman School and a minor in global political economy at the Maxwell School. She is a Whitman Leadership Scholar and a member of the Renée Crown Honors program. France was recently appointed junior analyst at the Orange Value Fund. She is a member of the Finance Council of the Syracuse Student Association and a representative for Whitman in the Assembly.

Additionally, France is the secretary and founding member of the Syracuse University Black Student Union. In its many areas of service and commitment, France acts as a voice for fellow students and an advocate for change. It is committed to transparency in financial reporting; diversity, equity, inclusion and accessibility initiatives; and equitable university policies.