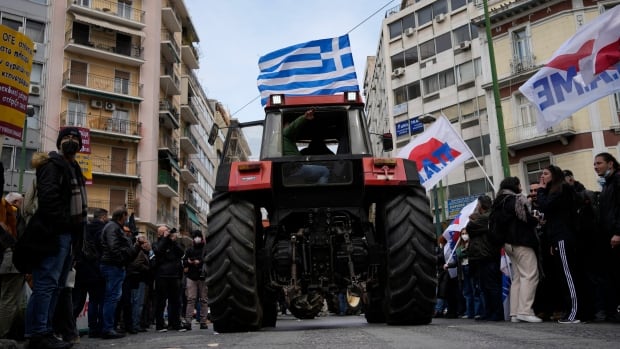 High energy costs are fueling unrest in parts of Europe, with Spain deploying more than 23,000 police amid a strike by truckers on Friday, while farmers in France and Greece snarled traffic with their protests.

Russia’s war in Ukraine has further driven up the costs of oil and natural gas in Europe, driving record inflation and making it increasingly expensive for farmers and truckers to refuel equipment and vehicles, buy fertilizer or meet other costs. In Europe, which depends on Russian oil and natural gas, the war has worsened an energy supply shortage that has driven up costs for households and businesses for months.

A group of mostly self-employed Spanish truck drivers walked off the job a few days ago over high fuel prices and other grievances, and this strike has turned into attacks as most drivers continue to to work. Police in patrol cars and helicopters escorted convoys of trucks along highways and held off picketers on Friday, seeking to ensure goods like dairy and cement continue to flow, with some sectors reporting problems supplies on the fifth day of the strike.

Striking truckers have also been accused of throwing rocks at trucks that were still working this week, tearing up cargo tarps, stabbing truck tires and threatening violence at drivers who were working.

Roads in France blocked in protest

In France, which has seen scattered protests this week over soaring fuel prices, a convoy of around 20 farmers on their tractors in the western region of Brittany protested on Friday by driving slowly down a motorway and blocking a roundabout to draw attention to their plight.

French road hauliers and fishing crews have erected temporary barricades in recent days, using their vehicles and flaming pallets to block the roads.

Truckers also drove through Berlin and other German cities on Friday, honking their horns in protest at high fuel prices.

Meanwhile, hundreds of protesting farmers blocked traffic in central Athens to demand that the government grant them additional concessions to meet high energy costs. Waving vegetables and black flags, protesters, some on tractors, gathered outside the agriculture ministry and planned to march to parliament in the center of the capital.

In Spain, the government has repeated claims that far-right sympathizers there are inciting strikes.

Finance Minister Maria Jesus Montero told reporters the walkout amounted to “an extortion, which the far right exploits to prevent the distribution of products and food.”

Striking truckers deny links to far right. In a statement published Thursday evening on their website, they said the government was “attempting to criminalize and place ideological labels on a sector that wants to live only from its work and that feels excluded and despised by the leaders of the country. “.

The Platform for the Defense of the Road Transport Sector, which called for the strike, says it emerged spontaneously in 2008. It was created by six truckers from Spain’s northwest region of Galicia , unhappy with national trucking associations, says its website.

The group is not affiliated with major national trucking associations or trucking companies, nor does it sit at the industry’s bargaining table with government. The group did not immediately respond to a question about how many members it has.

However, independent truckers are playing their economic strength with the strike and are using the walkout to pressure the government into giving in to their demands on a range of issues.

Companies in the cement, mining and dairy sectors are among those reporting that stocks are running low or that they are struggling to distribute their goods.

“Providing food and basic services is no small feat,” said Agriculture Minister Luis Planas. “It’s a constitutional question that has to do with freedom of movement.”

Independent truckers say what they’re paid to haul loads doesn’t cover their costs, which have skyrocketed with rising fuel prices. They also claim that large distribution companies are engaging in unfair competition, lowering freight prices, and demanding better working conditions, including retirement at 60.

WATCH | High gasoline prices could have a ripple effect:

As gasoline prices hit record highs, Canadians are being warned to prepare for higher costs on groceries, electronics and other consumer purchases. 2:01

The Spanish government has said it plans to introduce measures against high energy and fuel prices later this month, which has been done by other governments across Europe, as high energy prices are fueling higher consumer prices.

The unrest comes as the prime ministers of Spain, Portugal, Italy and Greece met on Friday to call for an urgent European Union-wide response to the energy crisis at next week’s European Council meeting in Brussels.

The Spanish government has said it wants to wait to take more action on energy prices until Europe can agree to do so.