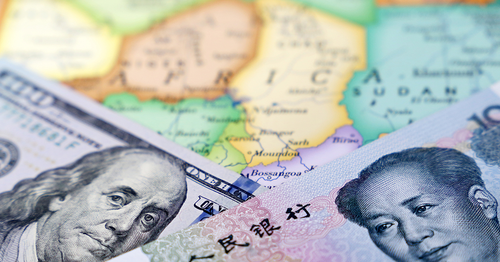 New trading partners seek to establish themselves, but the former colonial powers are well established.

Although the UK, France and Germany still wield significant influence over their former African colonies, a new wave of countries are seeking to gain influence by developing diplomatic, economic and military ties with countries on the continent. .

Russia, Turkey, Israel and Persian Gulf countries are expanding their influence in Africa, as are the United States and China, marking a shift in the balance of power between non-African nations active on the continent.

There are now more external actors operating in Africa than ever before. However, the new actors cannot replace the former colonial powers, since the level of commitment of the former remains relatively low, according to Steven Gruzd, head of the African governance and diplomacy program at the South African Institute of International Affairs.

“The scene is crowded with traditional and emerging players,” he says. “All are competing for trade, investment, markets, influence and political and diplomatic support. This has created more complexity and more choice of partners for African countries, which have to manage many competing interests. Africa’s raw materials and consumer markets are attractive to both older and newer players.

For example, Turkey had 12 embassies in Africa in 2009 but currently has 43 embassies across a continent of 55 countries, illustrating the diplomatic momentum that is uniting around new players.

Russia, meanwhile, has aggressively pursued strategic goals in Africa, such as gaining a foothold in the eastern Mediterranean, access to the Red Sea naval port, expanding opportunities for natural resource extraction and the promotion of alternatives to democracy as a regional norm.

The expansion of the activities of these states in Africa is based on bilateral relations born of a sincere belief that any relationship formed positively affects the continent.

“In the past, exploitative commercial interests have singularly underscored the imbalanced relationship between colonial powers and their colonies,” says Tinashe Nyamunda, associate professor in the Department of Historical and Heritage Studies at the University of Pretoria (UP). “Today, the emergence of new relationships is not an indication of a shift in the balance of power but rather a confirmation that African states are no longer blindly playing Western influence.”

China has been the largest investor in Africa over the past decade, followed by the United States, France, Turkey, United Kingdom, Germany, India, Japan and the United States. United Arab Emirates, according to the Status Quo 2021 report on business relations between Switzerland and Africa by the Swiss-African Business Circle. .

The relationships formed in the early stages of African states’ independence began with the Berlin Conference of 1884-1885, which regulated European settlement and trade in Africa during colonial expansion by Europe, the United States. States and Japan in the late 19th and early 20th centuries. Today, countries form symbiotic relationships where commercial interests dictate the agenda.

“It’s not really a shifting balance of power when we see countries from other regions that weren’t associated with colonialism receiving a warm welcome in African capitals,” notes Winnie Rugutt, tutor in the Department of Diplomacy and Development. International Studies from the University of Nairobi. “It’s about economic gains, not flexing global power. These emerging economies from the Arab world, Eastern Europe and Asia see Africa as the potential next frontier for doing business with mutual benefit for engaging states.

The former colonial powers did not sit on their laurels, as they aggressively attempted to consolidate their hold on the former colonies. Take France, for example: in 2017, President Emmanuel Macron pledged to overhaul France’s relationship with Africa during a visit to Burkina Faso. Four years later, Macron hosted the New France-Africa Summit in Montpellier, France, on October 8, 2021, to present the results of the policy.

“The influence of the traditional powers of the West will not evaporate overnight. They have a long history of investing in the continent by engaging in public diplomacy where the tool of trade is to win the hearts and minds of a population, and they have verifiably succeeded,” says Rugutt.