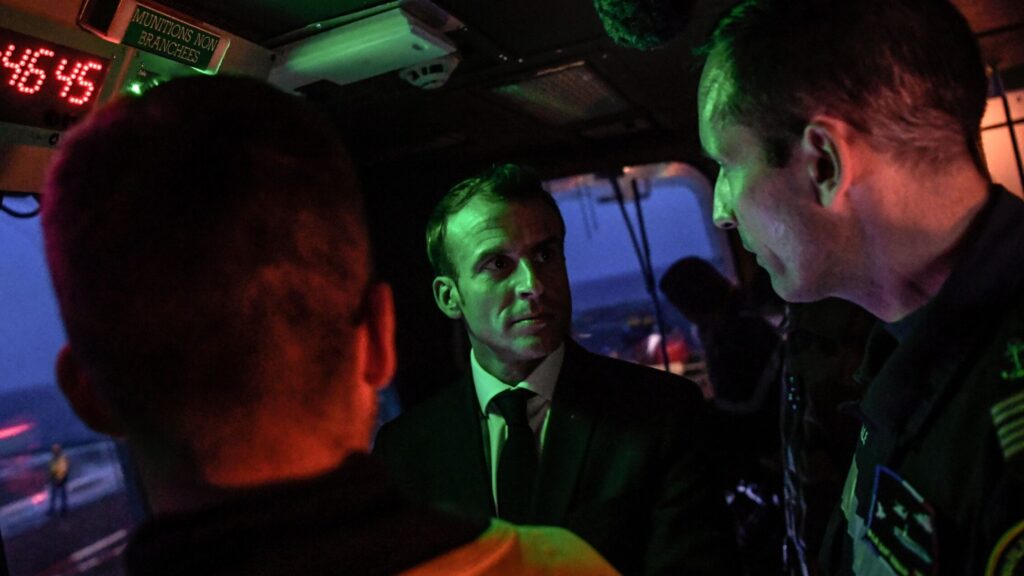 Macron: France’s new strategic review to meet a “dangerous moment” in the world

French President Emmanuel Macron talks to members of the French Navy as he stands on the deck of the modernized Charles de Gaulle aircraft carrier off Toulon, southern France, November 14, 2018. ( Photo by CHRISTOPHE SIMON/POOL/AFP via Getty Images)

PARIS — France’s new strategic review, intended to inform the military programming law (MPL) 2024-2030 which must be submitted to parliamentarians early next year, was presented by President Emmanuel Macron during a grand speech aboard the Diksmuide helicopter landing ship in the Mediterranean port of Toulon.

Speaking for almost 45 minutes on Wednesday to an audience made up largely of soldiers, Macron explained that the MPL “will have to, through its articles, its figures and its commitments, paint the picture of a united, strong, autonomous in its assessments and sovereign”. in its decisions, robust and credible, respected for its status as a nuclear power, engine of European strategic autonomy, exemplary ally in the Euro-Atlantic area, reliable and credible partner.

On board the newest of the French Navy’s three Mistral-class helicopter landing ships (the Navy’s largest ships after the aircraft carrier Charles de Gaulle), the President remarked that “the period is not not that of a calm weather but of a rough sea”. And while the 2017 edition of the French review was updated last year, the Russian invasion of Ukraine forced a more radical overhaul.

“What’s at stake [in Ukraine] is not only the illustration of tendencies that were already at work, but a massive acceleration and, to a certain extent, a clarification of other aspects by its tens of thousands of deaths, its rigors, its magnitude, by technological developments with new weapons whose trumpeted performance is not always proven and older ones for which lethal new uses have been found,” Macron said. “And finally because this war clarifies the state of the world in which we live, the collapse of norms and taboos, the abuse of power, it qualifies this dangerous moment when the old balance is challenged but the new one does not is not yet established. ”

The strategic review itself is a 52-page document [PDF] in three parties. The first and second are a strategic analysis and the challenges ahead, both summarized by Macron in his speech. The third part defines 10 strategic objectives:

2. Strengthen resilience to military and non-traditional security challenges (manipulation of information, climate change, resource predation, pandemics, etc.) by promoting the spirit of defense and ensuring national cohesion. To this end, France is implementing a national resilience strategy to strengthen its ability to resist any type of attack on the normal life of the country. In addition, the universal national service will be reinforced in an undefined manner; Macron said he would reveal more about it in the first quarter of 2023.

3. Ensure that French industry can support a long-term war effort by building up strategic stocks, relocating the most sensitive production chains and diversifying suppliers. This would appear to be a continuation of the idea of ​​a “war economy” that Macron first floated at the Eurosatory conference in June.

4. Improve cyber resilience. “There is no means available to create a cyber shield that would thwart any cyberattack against France, but strengthening its level of cybersecurity is essential to prepare the country for more threats,” the document states. To do this, “the efforts undertaken in the public and private sectors must be amplified”. It should be noted that the document specifies that “notwithstanding the important work already undertaken, the cybersecurity of the State has a significant margin of improvement” and that “the level of cybersecurity of all public services must be raised significantly”.

5. The key role of NATO in the defense of Europe, the role of France within it and the strengthening of the European pillar. The document specifies that “France intends to maintain a unique position within the Alliance. It has a demanding and visible position due to the specificity and independence of its defense policy, in particular due to its nuclear deterrence. She adds that on the strength of its operational credibility, its rapid reaction capability and its financial contribution, “France intends to strengthen its influence and that of the European allies in order to influence major developments in NATO’s posture and on the future of strategic stability in Europe. .” The document notes that France “excludes an extension [of membership] to other geographical areas, notably the Indo-Pacific.

7. Be a reliable partner and a credible security provider. The document mentions an in-depth relationship with Germany, key partnerships with Italy and Spain, strategic partnerships with Greece and Croatia, its capability partnership with Belgium, mentions Ukraine, Moldova and Georgia and notes that a “constructive dialogue” must be “quickly restored”. with the UK. The strategic partnership with the United States “will remain fundamental, and must remain ambitious, lucid and pragmatic”. Relations with African nations, the Persian Gulf, the Mediterranean and Red Sea, and the Indo-Pacific region are all mentioned.

8. Improve intelligence. France must pursue in-depth reforms of its intelligence services and have an “ambitious” human resources policy to attract and retain personnel. It must also invest in new technical tools which “must use the potential of quantum computing and artificial intelligence”.

9. Defend and act in hybrid domains (deliberately ambiguous combinations of direct and indirect, military and non-military, legal and illegal modes of action, often difficult to attribute). A more agile, responsive and integrated organization will be adopted to “identify, characterize, trigger appropriate protection mechanisms (…) but also to respond effectively”. It also develops tools to counter private military companies used as proxies by hostile powers. It also prioritizes the protection of critical infrastructure.

10. Freedom of action and ability to conduct military operations. This is a list of statements concerning the readiness of the French armed forces to engage not only in high intensity combat, but also to deploy at short notice and to be the first on the field of battle “with or without possible support from allied countries”.

Macron devoted a large part of his speech to France’s relations with other countries, mentioning in particular that “our commitment alongside our partners in Africa will now be centered on cooperation and support for their armies. This will result in a lighter and more integrated presence. He added that in the coming days, discussions with African partners, allies and regional organizations will be held in order to “work together on the evolution of the state, format and missions of the current French military bases in the Sahel. and in West Africa in order to build with interested parties an organization and common and shared instruments to support the armies of the region.

The President also announced that “our interventions must be better circumscribed in time from the outset. Our vocation is not to remain engaged indefinitely in our external operations.

These two points appear to reflect Macron’s decision in February to withdraw his forces from Mali, where France had been engaged in operations for more than nine years – with more than 50 casualties during this period.

In addition, Macron acknowledged the difficulties of a strategic review that addresses both the current threat and the future of the conflict – a familiar struggle for defense planning of any NATO country at this time. “We must find answers to the problems of today and tomorrow bearing in mind that the army of 2030 that we must build, its women, its men and its capabilities, must not be the ideal army. that we would have wanted in 2022 but the army that we need in 2030…”.