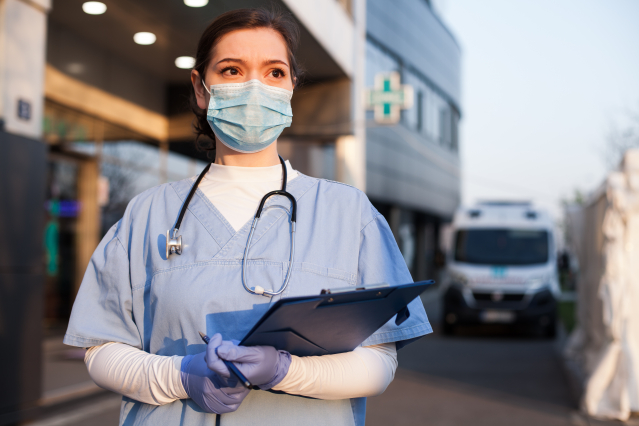 Hospital staff in France called to protest against labor shortage

Hospital staff were called to demonstrate across France this Saturday, December 4 against a staff shortage, made worse by the Covid-19 pandemic.

Industry unions have launched the appeal.

Up to 20% or more of hospital positions remain empty, and the shortage is now starting to hit nurses, with 7% of positions now unfilled. Staff have left, resigned, gone on sick leave or been suspended for lack of a Covid vaccine.

Health professionals are required by law to be fully immunized, under penalty of suspension.

At Bourges hospital in Cher, Center-Val de Loire, Dr Isabelle Meyer told FranceInfo that she was looking for doctors “everywhere”, and was conducting video call interviews with people based all over the world.

She said the shortage of available doctors had forced her to turn to foreign doctors, army doctors, reserve health care teams and even ask retirees to return.

She said: “We are now only four, for 27 positions [in my department]. If we were all working 24 hours a day, we would be forced to work 365 days a year just to cover it.

Some hospital workers even work 24 hours a day, three times a week.

The Jacques-CÅ“ur center of the hospital is particularly in difficulty after the retirement of the staff and no one was there to replace them.

Dr Meyer explained that young doctors prefer middle roles which are better paid and with more flexible hours (as they choose their own), for example: up to â‚¬ 2000 for a 24 hour shift on less popular days like Christmas .

Read more: French â€œMedical desertsâ€: plea by the mayor on the lack of rural general practitioners

Finding enough staff has almost become her own full-time job, she said.

She said, â€œIt’s a real puzzle. There are holes in the schedule every day … Someone who is sick, or a temporary agency doctor can tell us that the next day, finally, he cannot come. It happens.”

Last October, the ambulances of the Samu could not leave for an intervention for lack of personnel, she said.

Dr Olivier Michel, head of the intensive care unit at Bourges hospital, said: â€œOn a service which usually has 12 beds for the entire department, we only have 10 open beds, so two beds are closed. .

â€œWe don’t have enough nurses to increase our number of beds in case we see more hospitalizations of Covid patients. A certain number of nurses are on sick leave, are absent, have resigned … Some have been suspended. “

â€œIn an institution like ours with over 2,000 employees, we still have seven nurses who have been suspended for not having been vaccinated. There isn’t much, but he adds. “

As a result, the hospital had to close 52 beds, including in the geriatric, cardiology and intensive care departments.

Last week, the hospital adopted the “hospital under hospital” system, after seeing an influx of patients with winter illnesses, as well as Covid patients.

The â€œunder stressâ€ protocol is designed to help a facility cope with a crisis situation while maintaining continuity of care and safeguarding patient and staff safety.

It is the last level of alert before the â€œwhite planâ€ status, which allows hospitals to cancel or postpone appointments and non-urgent operations in order to redirect staff and resources to the most urgent cases. ; and add emergency beds.

Covid has only intensified the problem, doctors say.

AgnÃ¨s Cornillault, director of the Center hospitalier Jacques-CÅ“ur de Bourges, declared: â€œObviously, the hospital is in an even greater crisis, because today, we are living with the Covid.

â€œI have no doubts about the hospital’s ability to adapt, but I doubt its ability to remain resilient and withstand another crisis. So many people have given so much to overcome the peaks of the crisis. As a result, people are exhausted and wonder what they want to do next.

The hospital expects to have to transfer some patients to nearby hospitals if an influx of Covid patients is admitted over the next few days and weeks – but there is no guarantee of a place elsewhere either.

The â€œwhite planâ€ has already been promulgated in certain hospitals in France, notably in Colmar and Mulhouse in Haut-Rhin, Grand Est.

Colmar hospital sounded the alarm on December 1 and stressed that its resuscitation services are now overflowing with unvaccinated people.

Emergency chief Dr Yannick Gottwalles told France Bleu: â€œAll Covid patients admitted to intensive care who are not vaccinated. The intensive care units are saturated with patients who would not be there if they had been vaccinated.

“We are dealing with this and increasing our capacity because the fifth wave is here and we are not done with this epidemic yet.”

Her colleague, Dr Elisabeth Gaertner, head of the anesthesia-intensive care unit at the hospital, said: â€œI see patients who are 20, 37 or 40 years old, who do not show any signs of other ailments, and who must be intubated because arriving in great respiratory distress.

Mulhouse hospital currently has 77 Covid patients, including 16 in intensive care.

The occupancy rate of intensive care beds is currently 37.3% throughout France, but the capacity varies considerably from one department to another.

It comes as the fifth wave of Covid continues at a steady pace in France, and the government is urging all eligible adults aged 18 and over to reserve their booster shots as soon as possible.

The latest figures from Public Health France (December 1) show that there have been 49,610 new confirmed cases of Covid in France in the past 24 hours, and 93 more deaths.

The rate of positive tests is now 5.8%, and the first case of the new Omicron variant is now confirmed, in the Paris region.

Delays reported in rush for COVID booster doses in France

Coronavirus: daily update on the situation in France

Wes Anderson pulls another movie out of his ear