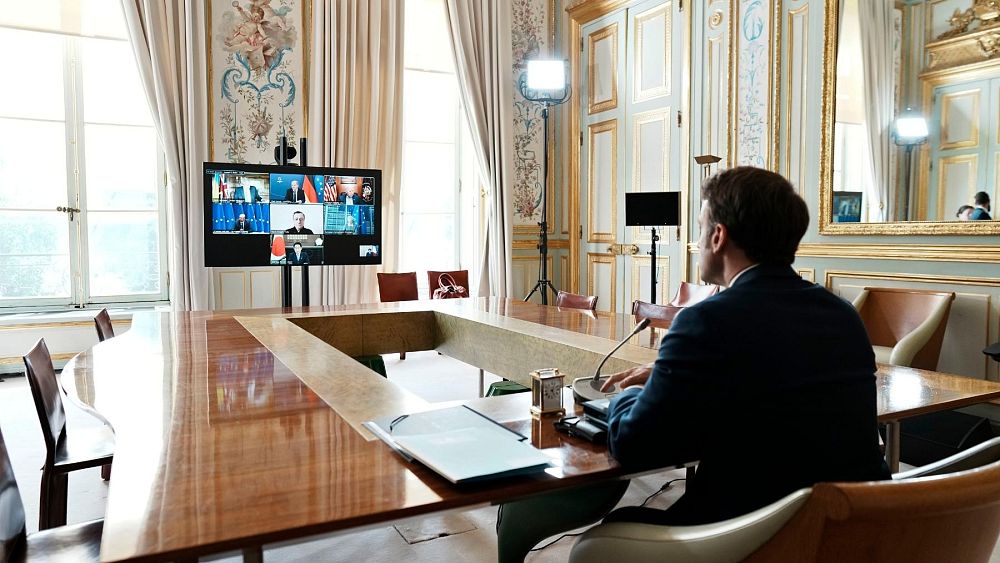 Leaders of the Group of Seven’s developed democracies pledged on Sunday to phase out or ban the import of Russian oil.

They pledged during their meeting with Ukrainian President Volodymyr Zelenskyy to underscore their support and show unity among Western allies on Victory in Europe Day, which marks the surrender of Nazi Germany in 1945.

Cutting Russian oil supplies will ‘hit the main artery of (President Vladimir) Putin’s economy hard and deny him the revenue he needs to fund his war’, G7 countries – France, Germany, Italy, Britain, Canada and the United States – said in a statement.

“We will ensure that we do this in a timely and orderly manner, and in a way that gives the world time to secure alternative supplies,” they added.

Looking back on World War II, the leaders stressed unity in their resolve that Putin must not win.

“We owe it to the memory of all who fought for freedom in World War II to continue to fight for it today, for the people of Ukraine, Europe and the global community,” they said.

US announces new sanctions against Russia

The United States also announced new sanctions against Russia on Sunday for its invasion of Ukraine.

These include cutting Western advertising from Russia’s three largest television channels, banning US accounting and consulting firms from providing services to any Russian, and imposing additional restrictions on Russia’s industrial sector, including to cut off Moscow from wood products, industrial engines, boilers, bulldozers and Suite.

The White House announced the new sanctions ahead of VE Day on May 9, when Russia traditionally celebrates the defeat of Nazi Germany in 1945 with huge military parades.

President Putin is expected to talk about what he calls “the special military operation” in Ukraine and address troops in Red Square on Monday.

American and European allies sought to deliver a counter-message that Putin is further isolating Russia from the rest of the world and hurting Russia’s economy immensely.

Ahead of the call, British officials said Britain would provide an additional £1.3bn (€1.5bn) in military support to Ukraine to help the country defend against Russian forces .

Canadian Prime Minister Justin Trudeau paid a surprise visit to Ukraine on Sunday, visiting the northern town of Irpin, which had been heavily damaged by Russia’s attempt to take the capital of kyiv at the start of the war . On Sunday, the mayor posted images of Trudeau on social media, saying the Canadian leader was shocked by the damage he had seen in civilian homes.

Trudeau’s office later said that “the prime minister is in Ukraine to meet with President Zelenskyy and reaffirm Canada’s unwavering support for the people of Ukraine.”

Jill Biden also made an unannounced visit on Sunday, arranging a surprise Mother’s Day reunion in western Ukraine with first lady Olena Zelenska. Biden has traveled under the cloak of secrecy, becoming the last high-profile American to enter Ukraine during his 10-week war with Russia.

In Germany, Chancellor Olaf Scholz said in a televised address that Sunday was “a May 8 like no other”.

He said Germany had worked hard to come to terms with its actions during World War II, reconciling with Russia and Ukraine and committing to the concept of “never again”. But Russia’s “barbaric” invasion of Ukraine in February brought war back to Europe, Scholz said, a prospect that once seemed unthinkable.

German Bundestag President Bärbel Bas, Germany’s second-highest ranking official after the president, met with Zelenskyy in kyiv on Sunday and attended a commemorative event in honor of the anniversary of the end of World War II.

“We really appreciate that on the day of remembrance and reconciliation itself, and in what is such a trying time of war for us, the President of the German Bundestag Bärbel Bas came to support Ukraine,” a message said. posted on Zelenskyy’s Telegram channel on Sunday. .

The Croatian prime minister was also in Ukraine on Sunday following reports that a Croatian citizen fighting in Mariupol had been captured by Russian forces. The Croatian government said Prime Minister Andrej Plenkovic’s visit presented “an expression of solidarity and support” with the Ukrainian leadership and the people.