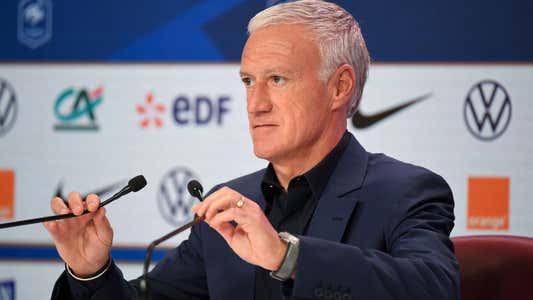 Les Bleus de Deschamps will face Bafana Bafana in an international friendly match at the Pierre-Mauroy stadium in Villeneuve d’Ascq on Wednesday evening.

“I know the offensive players [in the South Africa team] better, attackers. Dolly is an interesting player. The two strikers, Letsoalo and the other is Makgopa,” Deschamps told the official website of the South African Football Federation.

The 2018 FIFA World Cup-winning coach will know Dolly as the Kaizer Chiefs winger was on Montpellier’s books in the French Ligue 1 between 2017 and 2021.

Dolly and Baroka FC striker Makgopa started for the Bafana against Guinea in a friendly that ended in a 0-0 draw in Belgium on Friday, while Royal AM striker Letsoalo featured in as a substitute.

“Yes, of course, we had people from our team watching your game [against Guinea]. But I don’t think it will be the same players who will face France,” revealed Deschamps, who is a retired French defensive midfielder.

“Even though it’s a friendly game, we are preparing for the 2022 World Cup. It gives us the opportunity to play against an African team, and that’s not always the case for us.

“For example, the last time [we played against South Africa who beat France 2-1] It was in 2010 at the World Cup. In the next World Cup, we may be playing against African nations and these teams could have the same qualities, the same style of play as South Africa.

After orchestrating France’s 2-1 victory over the Ivory Coast in a friendly on Friday, Deschamps expects his Bafana counterpart Hugo Broos to name a more experienced side against the Blues than the one who has faced Guinea.

“South Africa has a new generation of players. For me, this explains why South Africa did not qualify for the Africa Cup of Nations [earlier this year] and the World Cup,” added the captain who won the 1998 World Cup and Euro 2000.

“There are a lot of local players who don’t have a lot of international experience. But obviously we watched a lot of games in South Africa, several of their last games, and I also watched their last game against the Guinea.

“But I don’t think it will be the same players because there were a lot of young players on the pitch against Guinea.”

In France, construction of the innovative Montclar solar project