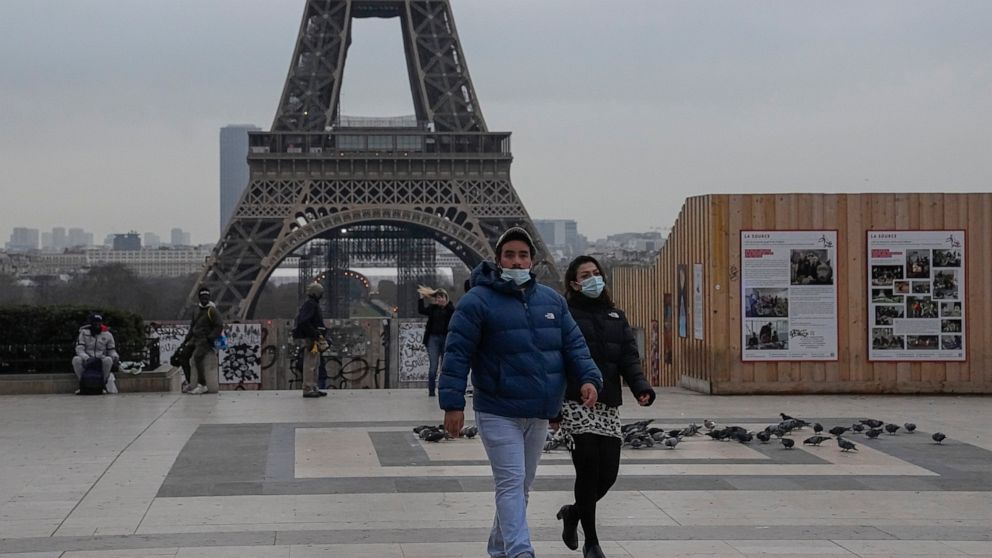 France to restrict travel from Britain to fight omicron

PARIS – France will severely restrict travel to and from Britain due to the rapid spread of cases of the omicron coronavirus variant, limiting the reasons for travel and requiring 48 hours of isolation on arrival, the government announced on Thursday.

The move suddenly disrupted travel plans for families and others on both sides of the Channel. Travelers questioned whether the measures were politically motivated, and UK officials suggested they were unnecessary.

With omicron now established worldwide, the ‘red list’ travel bans “would neither be effective nor proportionate,” said UK Prime Minister Boris Johnson spokesman Max Blain. He said Johnson had not spoken to French President Emmanuel Macron about the move and that Britain was not considering taking reciprocal action.

One puzzling element of the new French rules was that those targeting Britain are milder than those targeting South Africa – even though the number of infections in Britain is currently higher. There was no immediate explanation for why.

South African tourism officials have said restrictions on their country appear to be aimed at discouraging the French from traveling to South Africa, as they will face a long and expensive quarantine after their return.

“It is unfortunate that once again South Africa appears to be discriminated against without scientific basis,” said Steve Motale, spokesperson for the country’s tourism department.

Emmanuelle Gille, who traveled from Johannesburg to Paris on Thursday, called French restrictions on arrivals from South Africa “disproportionate and unjustified”. She said the stricter rules, compared to those for UK travelers, are “very unfair”.

French government spokesman Gabriel Attal told BFM television that tourism and business travel to and from Britain will be sharply reduced, and anyone arriving from Britain will have to have a negative virus test dating back less than 24 hours, and retest upon arrival and isolate “in a location of their choosing” for at least 48 hours while awaiting the result.

Everyone arriving from South Africa must self-quarantine for 10 days, with a fine of 1,000 euros ($ 1,130) if the quarantine is violated or shortened and a mandatory test on arrival.

The new French measures will come into force on Saturday, just after midnight, French Prime Minister Jean Castex said in a statement. They will apply to vaccinated travelers as well as to unvaccinated travelers. The French government is hosting a special virus safety meeting on Friday that will address the growing pressure on hospitals from the rise in infections in recent weeks.

Londoner Derek Lubner traveled to Paris on Thursday just before the deadline. â€œIt’s crazy. (Omicron) is already spreading in France,â€ he told The Associated Press at Gare du Nord. â€œI mean, I understand that they have to protect people, but this “is here. What can you do? And it’s going to hurt people. It hurts people, tourists, local businesses.”

Officials in the UK travel industry have expressed dismay at the French restrictions, demanding government help for struggling businesses.

“The winter sports and school travel markets are particularly vulnerable, and the government must now come up with a support plan if we are not to see business failures and job losses,” said Mark Tanzer, Managing Director of the Abta Travel and Trade Association.

According to the aeronautical analysis company Cirium, several hundred flights are scheduled between Great Britain and France during the week before Christmas. That’s the equivalent of over 90,000 seats, although the new restrictions mean they will likely be largely empty.

The UK on Wednesday recorded the most new confirmed COVID-19 infections since the start of the pandemic, and England’s chief medical officer has warned the situation is likely to worsen as the omicron variant leads to a new one. wave of illnesses during the Christmas holidays.

According to France’s new measures, citizens of any EU country can still enter France from Great Britain, in addition to non-EU citizens with long-term residence permits or a long-term visa, and other categories of people, including truckers who are only in transit in France, diplomats and health personnel. All other foreigners are not allowed to enter.

People will only be allowed to leave France for Great Britain if they are not French, or if they have an urgent medical or legal reason to travel.

The brutal move comes after weeks of political tension between France and Britain over post-Brexit fishing rights and how to deal with migration in dangerous small boats across the Channel.

It also comes as the French government desperately tries to avoid a new lockdown or tougher measures that would hurt the economy and darken President Emmanuel Macron’s expected campaign for the April presidential election.