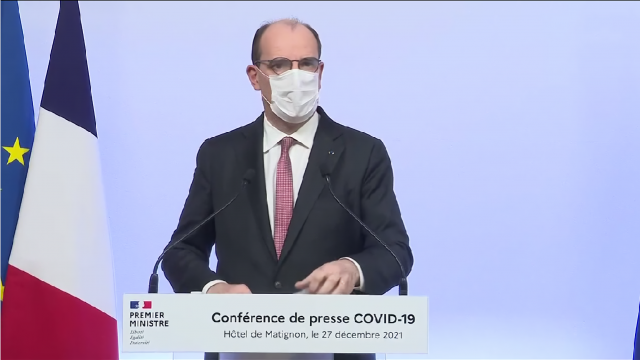 These include the compulsory wearing of masks in all city centers, the ban on consuming food and drink on TGVs and other public transport, the limitation of major events and the strengthening of homework. .

However, there will be no curfew for New Years Eve and the return to school, scheduled for January 3, will proceed as planned.

Mr. Castex said: â€œThe fifth wave brought by Delta is far from overâ€¦ And a new wave is sweeping our continent with the Omicron variant, with 100,000 cases per day. [in France]. “

Read more: Daily updates on the Covid situation in France

He recalled that vaccines were “the decisive element” in stemming the spread of variants and protecting people from severe forms of Covid.

Health Minister Olivier VÃ©ran, also present at the press conference, said that a fourth dose of vaccination was a “possibility”.

“We work [on this] with our European counterparts, and with Israel, which was the first to start vaccinating. We are totally open to this prospect, â€he said.

“If I have to go see the French and tell them that a new dose is needed, I will,” he added.

This fight, together, by the spirit of responsibility and solidarity, we will win. pic.twitter.com/dook9C9ddd

A decree declaring a state of health emergency must be taken for Reunion Island and must be extended to Martinique.

A final point that was not mentioned at the press conference is that all the â€œbest wishesâ€ meetings in January, which are traditional in France in companies, associations and often town halls, are canceled.

Another Covid ministerial meeting is due to take place on January 5.

More cases, fewer deaths: how the 5th wave of Covid in France compares so far