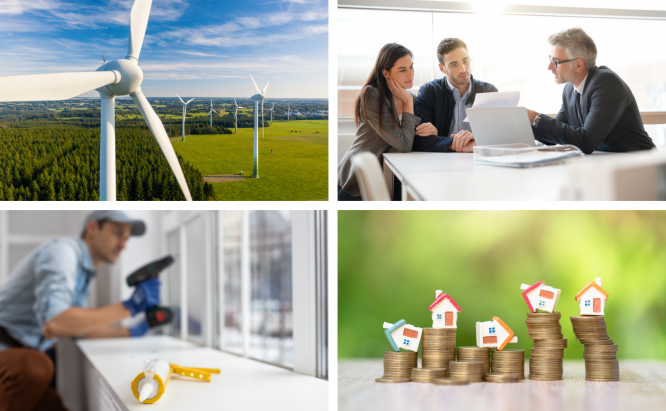 Five updates for owners in France

The price of non-new houses in France in the first quarter of 2022 is relatively stable compared to the end of 2021, with slight increases.

Overall, properties in France were 7.3% more expensive in the first quarter of this year compared to the same period in 2021.

This is an increase of 0.1% compared to the last quarter of 2021, when prices increased by 7.2% year-on-year. Read more about it in our article here: Coastal boom, inflation: Six French real estate trends according to notarial data.

The general rise in prices compared to last year is mainly due to home buyers outside Ile-de-France, inspired by the Covid and the subsequent confinements.

Overall, house prices rose 9.2% in the first quarter of this year compared to the same period last year, while apartment prices rose only 4.7% in year-on-year.

In Ile-de-France, the prices of houses and apartments combined increased by only 2.5% year on year in the first quarter of 2022, while outside they increased by 9.3%.

These data, communicated by INSEE, show that in general, real estate prices were stable in the first quarter of 2022 compared to the end of 2021.

It should be noted that these prices do not yet take into account the effects of the Russian invasion of Ukraine, which pushed inflation in May to 5.2% and sent building material costs soaring.

The Cost of DIY Home Projects Is Rising Due to Shortages: Should You Delay?

Can craftsmen in France increase the price of work after signing a quote?

An article in French newspaper Sud Ouest exposes the difficulties of a lessor in evicting a tenant whom he claims to let stay in a property which he is renovating temporarily and with low rent because he is the son of a friend. The saga has been going on for 14 years.

It all started in 2008 when Raymond Rolland, now in his 80s, bought a property in Chancelade (Dordogne) with friends, which they planned to fit out and transform into three apartments to live in.

An acquaintance then asked if their son, who had just been divorced and needed accommodation, could live in one of the apartments. Mr Rolland said they had agreed to let him live there temporarily for €250 a month.

Mr. Rolland claims that the tenant chose not to leave.

He then succeeded in having the property listed as ‘unsanitary‘, a legal classification signifying that the property poses a risk to a person’s health or well-being.

Mr Rolland said he and the other owners had planned to develop the property once the tenant left but had found no way to get him to leave.

Due to the property being classified as unsanitary, a court ordered the landlords in 2015 to renovate the property and suspend rental payments – they are still suspended.

“I think I’m right, but since the tenant knows all the intricacies, he always gets by,” Mr Rolland said.

“It’s the struggle of the iron pot against the clay pot.”

Mr Rolland claims the tenant blackmailed him into asking him for €10,000 to vacate the property.

The tenant chose not to tell Sud Ouest about it.

Wind farms have no noticeable impact on property value when located more than five kilometers away, and have very minimal impact if closer, according to a new study published yesterday (June 1st).

The French agency for ecological transition, Ademe, conducted this study to dispel rumors that the proximity of wind farms can lead to a significant drop in the value of a property.

The agency used statistical data on sales of single-family homes between 2015 and 2020 for the whole of metropolitan France – i.e. 1.5 million sales – and cross-referenced them with data on the location and installation of wind farms.

They combined this quantitative study with an analysis comparing the values ​​of two similar rural properties, one located near wind farms and the other not.

She concluded that there was no tangible impact on the price of a property if it was located more than five kilometers from a wind farm.

Closer to that, the study found that a property’s value can decline by 1.5% per square meter, a drop consistent with properties near other industrial sites or infrastructure such as antennas. telephone lines, thermal power stations, landfills, high voltage power lines, etc. .

These conclusions contrast with a 2019 report by the Sustainable Environment Federation, which brings together 1,300 associations and groups opposed to wind projects in France.

Their study, based on interviews with real estate agents, real estate experts, notaries, revealed that properties located near wind farms lost 20% of their value, sometimes more.

“This demonstrates that, statistically, real estate located near wind farms remains a liquid asset. There is no consistent pattern of properties becoming unsaleable when a wind farm is built.

There are approximately 8,000 onshore wind turbines in France (including the DOM-TOMs) spread over 1,380 parks.

4. All tenants of a building pay for an error of a

If a tenant of an apartment building carries out renovation work considered a nuisance to neighbours, all tenant owners of apartments in the building could be required to pay the costs, the Court of Cassation said. a recent verdict.

A tenant installed windows, without authorization, which overlooked a neighboring building. The neighbor filed a complaint, claiming damages due to abnormal neighborhood disturbance.

The Court of Cassation agreed and, in an April decision, ruled that the building’s syndicate was also responsible for not having intervened to stop the renovation.

This means that all tenants of the building are required to pay the costs, the extent of which has not been disclosed.

Read more: French real estate agents: what can I do if mine no longer responds?

Mortgage rates are rising rapidly in France due to inflation.

This is after a year 2021 where rates were particularly low.

The mortgage brokerage company Cafpi indicated that the average rate granted in 2021 was 1.1% over 20 years.

Alexandre Huvenoit, mortgage broker, told franceinfo that today people are being refused mortgages – because of their income – that they would have been granted two, three or four years ago.

Energy certificate rules could drive down house prices in France