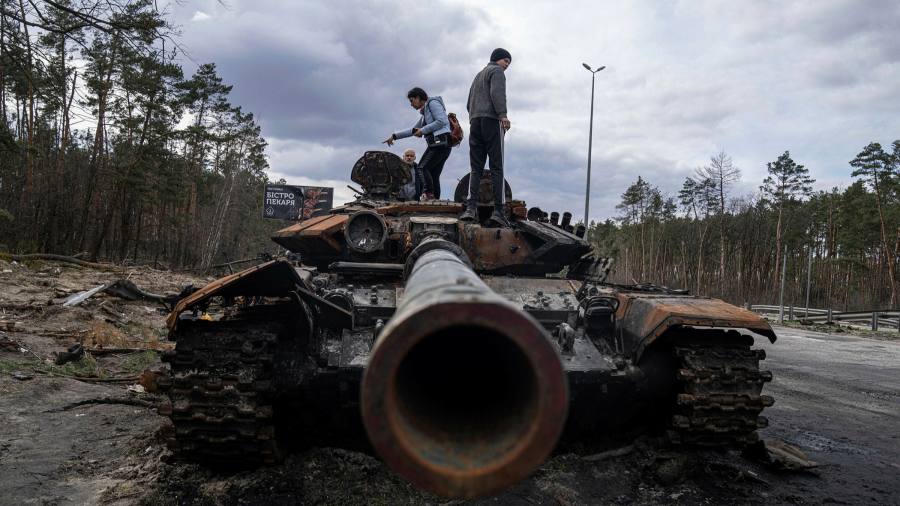 Hello. This article is an on-site version of our FirstFT newsletter. Subscribe to our Asia, Europe/Africa or Americas edition to send it straight to your inbox every morning of the week

Ukraine’s finance minister appealed for immediate financial support of tens of billions of dollars to fill a gaping budget gap caused by the Russian invasion.

Government spending exceeded revenue by about $2.7 billion in March and Ukraine expects the gap to widen to $5-7 billion a month in April and May due to the war. Ukraine’s gross domestic product was $164 billion in 2021.

“We are very stressed, at worst [financial] condition,” Sergii Marchenko said in an interview with the Financial Times. “Now it’s about the survival of our country. If you want us to continue fighting this war, winning this war . . . then help us.

Marchenko painted a grim picture of the damage to Ukraine’s economy caused by the full-scale invasion of Russia in late February. The destruction of civilian and military infrastructure was estimated at $270 billion, he said, with nearly 7,000 residential buildings damaged or destroyed.

Thank you for reading FirstFT Europe/Africa. Do you have any comments on today’s newsletter? Send it to [email protected] – George.

Five other stories in the news

1. Mélenchon the Kingmaker Hours after failing to qualify for the final stage of France’s presidential election, veteran left-winger Jean-Luc Mélenchon told his supporters they shouldn’t give ‘a single vote’ to the extreme candidate right Marine Le Pen in the second round on April 24. The identity of the next French president could depend on his listening.

2. UK pays for targeted antibiotics The UK is set to become the first country to pay pharmaceutical companies a fixed fee for supplying antibiotics in a bid to tackle the growing global drug resistance crisis. The aim is to further incentivize companies to develop new antibiotics, which would be selected to treat patients who really need them.

3. Torpedo a maritime fusion Alexander Saverys, heir to one of Belgium’s oldest maritime dynasties, has denounced Norwegian tycoon John Fredriksen’s ambition to create the world’s largest oil group in a $4.2 billion merger with the company founded by his family, vowing to stir up opposition to the project. .

4. US airlines and passengers at odds over masks Airline executives and politicians are pushing for the United States to let Covid-19 mask rules expire on schedule next week, even though most of the public want to keep them. Forced mask-wearing was linked to 72% of a record 5,981 reports of unruly passengers in 2021.

5. Australian Morrison fights his own party Hours after the Australian government announced a “free” budget that Scott Morrison hoped would propel him to a second term as prime minister, his own party began to tear it apart.

UK data The statistics office publishes labor market statistics for the month of April. His most recent Labor Force Survey estimates from November 2021 to January 2022 showed a continued recovery in the labor market.

Business results: UK online clothing retailer Asos releases first half figures. In January, its shares jumped after announcing it would move to the London Stock Exchange’s main market after 20 years on Aim. Deliveroo and JD Sports will post trade updates.

What else we read and listen to

German inflation alarm Like many Germans, Otmar Issing is alarmed by soaring inflation and worried about the “misguided” response from the European Central Bank. As the ECB’s first chief economist and founding father of the euro, Issing’s complaints carry more weight than those of most of his compatriots.

No dethroning of the dollar Sanctions against Russia are aimed at preventing Moscow from accessing foreign currencies, particularly the dollar. It should follow that countries keen to avoid a similar fate would seek to diversify away from the US currency. There is some logic to this, but the reality is that the greenback cannot be avoided, writes Megan Greene.

Energy demand puts species at risk As one of the most famous game reserves in the world, Murchison Falls National Park is home to some of the largest populations of elephants, giraffes, lions and leopards. But life is about to meet a new threat, as the $10 billion Lake Albert oil project run by TotalEnergies and Cnooc comes to life.

JPMorgan after Jamie Dimon JPMorgan offered rare insight into its succession preparations in a securities filing that said a ‘substantial majority’ of investors want Jamie Dimon to stay on as non-executive chairman when he steps down as chief executive. . If the jobs were split, it would go against the prevailing trend in American business.

Tech Tonic: crisps with everything In this week’s episode of the FT Podcast, we take an in-depth look at the semiconductor industry and Taiwan’s unique position as a hotbed of computer chip talent. James Kynge, Global Editor for China, examines the unintended consequences of the race for semiconductor dominance.

Thank you to readers who responded with their thoughts on John Lee’s entry into the race to succeed Carrie Lam as Hong Kong’s next chief executive. Here’s what two FirstFT Asia readers from the Asian financial hub had to say. (Both preferred to remain anonymous for security reasons.)

“The celebration of getting rid of Carrie Lam was cut short when people saw who the replacement will be. It should also be noted that almost everyone I have spoken to in the international community says that it will be an accelerator for them to leave Hong Kong.

“As a long-time resident of Hong Kong, I am hardly surprised by this development. This is part of the Chinese Communist Party’s takeover of Hong Kong. The Party allowed the incompetent Carrie Lam to stay in charge and make a laughing stock of one of the greatest cities in the world.

To work — Find out what’s changing the world of work with Isabel Berwick, Editor-in-Chief of Jobs and Careers. Register here

troubled times — Your essential FT newsletter on the changes in business and the economy between Covid and conflict. Register here

Thanks for reading and don’t forget you can add FirstFT to myFT. You can also choose to receive a FirstFT push notification every morning on the app. Send your recommendations and comments to [email protected] Register here

France should be inspired by the British book on Brexit

Carmila: Signing of an Asset Portfolio Transfer Agreement with Batipart and ATLAND Voisin