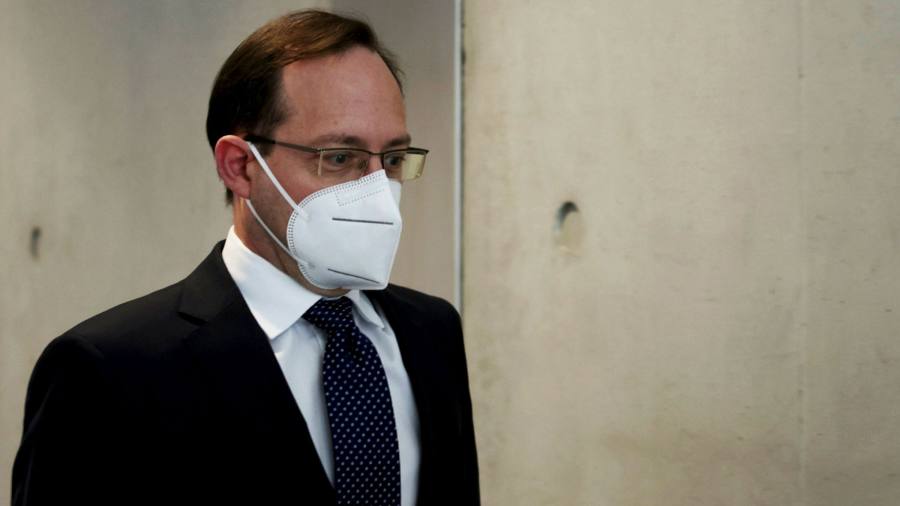 Hello. This article is an on-site version of our FirstFT newsletter. Subscribe to our Asia, Europe/Africa Where Americas edition to send it straight to your inbox every morning of the week

The former Wirecard accounting chief admitted to falsifying documents requested by KPMG during a special audit, ahead of a trial scheduled for later this year, according to people familiar with the matter.

Stephan von Erffa is one of three defendants charged with fraud, breach of trust and market manipulation in a case brought by Munich prosecutors over the dramatic fall of one of Germany’s most successful tech companies .

Wirecard filed for bankruptcy in June 2020 after admitting that half of its reported revenue and €1.9 billion in corporate cash allegedly held in escrow accounts in Asia did not exist.

Von Erffa denied involvement in the wider fraud and blamed fugitive Wirecard second-in-command Jan Marsalek during a parliamentary inquiry into the scandal last year. However, the police investigation found evidence that von Erffa falsified documents in early 2020 which were later shared with KPMG and EY auditors.

The 47-year-old is the first senior Wirecard executive to admit wrongdoing since Oliver Bellenhaus, head of a Dubai subsidiary, surrendered to authorities in July 2020 and became the main witness in the charge. Von Erffa, Bellenhaus and former chief executive Markus Braun, who denies any wrongdoing, are set to stand trial this year.

Thanks for reading FirstFT Asia. Here’s the rest of today’s news. — Sophie

Five other stories in the news

2. British politicians are sounding the alarm over Chinese CCTV providers MPs and peers from across the political spectrum have called on Prime Minister Boris Johnson to ban the sale of surveillance equipment in the UK to Chinese companies Hikvision and Dahua, which have already been blacklisted by the US for Beijing’s use of their equipment in the repression of Uyghur Muslims in China.

4. Germany warns of ‘historic challenge’ as trade slides into deficit Soaring energy prices and trade disruption have pushed the country into a $1 billion monthly trade deficit – the first since 1991. Economists expect Germany to slide into recession this year, with tough recovery years ahead.

5. The kidnapped Canadian billionaire will be tried in Shanghai Missing tycoon Xiao Jianhua has faced a Shanghai courtroom more than five years after the enigmatic trader was snatched from Hong Kong’s Four Seasons hotel by Chinese security guards. He faces fraud-related charges after his Tomorrow Group collapsed following a debt-fueled acquisition spree.

workers on strike Staff at washing machine maker Whirlpool will be voted for strike action today over what union bosses have called an ‘insulting’ wage offer.

What else we read

Global inflation: Japan faces a moment of truth The Bank of Japan’s ultra-loose monetary policy, which has lasted for decades, is coming under increasing pressure from rising global inflation. Analysts say the yen – and the Japanese economy – is at a critical juncture with two starkly different outcomes, depending on the central bank’s next steps.

Erdoğan is an infuriating but indispensable ally Turkish President Recep Tayyip Erdoğan’s decision to blackmail NATO over the admission of Finland and Sweden raises uncomfortable questions for the rest of the global alliance at a time when Western resolve is already on the table. test.

It’s time to change my subscription model As we navigate subscription fatigue in a market saturated with monthly membership fees, Robert Shrimsley investigates his personal ecosystem of deliveries, streaming services, newsletters and other recurring payments. He swears he will no longer fall into the demographic interested enough to sign up but too stupid to cancel.

“What really works for Trump is that the system is rigged” Michael Lewis, one of the greatest chroniclers of the American financial crisis, targets Donald Trump and America’s response to Covid-19 in an interview with FT Feature Editor Henry Mance.

Pop-up leaders and flexible staff are ready for a new crisis The entire workforce has just passed a global stress test in double-digit inflation and economic recession. Now, senior executives are better prepared to deal with disruption than leaders think, writes Andrew Hill.

Rare books have huge prices. It’s not easy to profit from “priceless” books on the black market, but that doesn’t stop thieves from trying. From high-tech heists to antiquarian crime rings, the literary underworld would make its own gripping novel.

Thanks for reading and don’t forget you can add FirstFT to myFT. You can also choose to receive a FirstFT push notification every morning on the app. Send your recommendations and comments to [email protected] Register here.