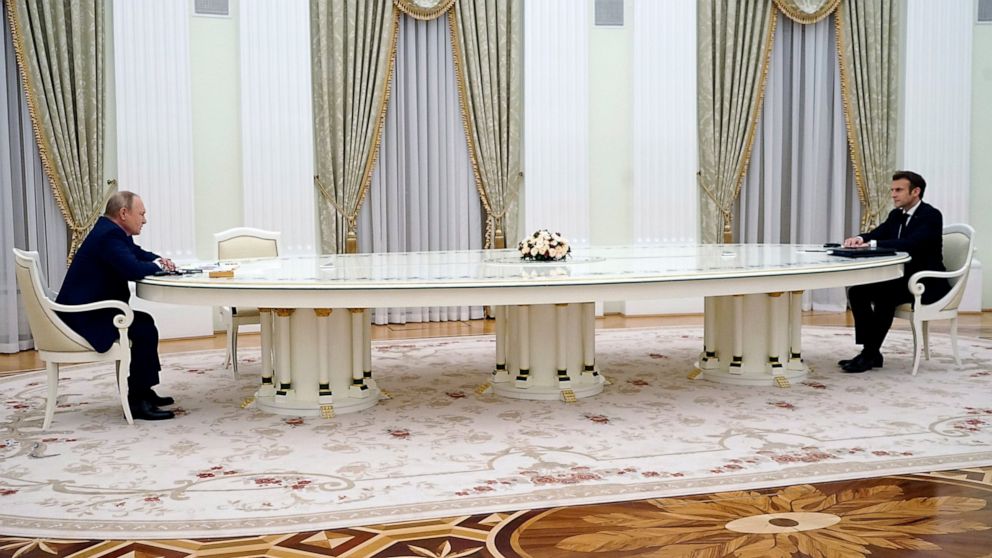 PARIS — “Vladimir… tell me what your intentions are.”

In the rare public recording of a discussion between two world leaders, Macron tries to convince the Russian president to “calm things down” in the region. But all of his suggestions lead to an impasse on Putin’s side.

The French documentary ‘A President, Europe and War’ offers a unique behind-the-scenes look at months of diplomatic wrangling amid Europe’s worst crisis in decades. It was supposed to focus on Macron during France’s presidency of the rotating EU presidency, but ended up capturing historic moments from the war in Ukraine, including following Macron to Moscow and on two trips to Kyiv.

During the call with Putin on February 20, the two leaders use the informal version of the word “you” to speak to each other, in a very direct tone.

Ukrainian President Volodymyr Zelenskyy is “lying to you”, Putin told Macron, accusing Kyiv authorities of coming to power through “a bloody coup”. People were burned alive, it was a bloodbath. Zelenskyy was democratically elected in 2019; Putin appeared to be referring to his own interpretation of earlier events in Ukraine.

At one point, the French president raises his voice slightly, visibly irritated: “I don’t know where your lawyer learned the law,” he says, openly criticizing Russian views.

Macron can also be heard pushing for a meeting between Putin and US President Joe Biden. Putin agrees in principle, but says he needs his aides first to prepare for the talks. The meeting never takes place.

“It was like a really tough conversation between two completely opposite people,” said French journalist Guy Lagache, who filmed and directed the film all by himself. He was integrated into the diplomatic service of the Elysée – exceptional access in a country where the president controls his public image and where diplomatic aides are generally kept out of sight of the cameras.

Putin’s promise to meet Biden turned out to be “a lie”, Lagache told The Associated Press. “But if you don’t try to do that (negotiate a meeting), you can’t know if he’s going to lie.”

Lagache’s comments echo those of Macron’s top diplomatic aide, Emmanuel Bonne, who warns in the documentary that Putin is “always lying”.

The Russian president, who likes to publicize his sporting exploits, closes the discussion in his own way by telling Macron that he is talking “from the gymnasium”.

“I wanted to go play ice hockey,” he says.

Another phone call allows viewers to feel the shock and horror of Zelenskyy and the urgency of the moment on the day the war began.

“The Russians, it’s terrible what they are doing. … Now they are in Kyiv, we are fighting in Kyiv, Emmanuel,” Zelenskyy told Macron. Macron remains silent for several seconds.

When Bonne, the diplomatic adviser, tries four times to call his Russian counterpart on his mobile phone, it is in vain. “They have the nerve to go to war, but not the courage to talk,” he said, seemingly helpless.

Lagache said that being there and filming he could “feel the drama unfolding”.

“And you see that politics is also – and above all – about people, (made) by people trying to find solutions in a very complex situation,” he added.

Macron can be seen holding a meeting in his bunker under the Elysee Palace and working with his team on the presidential plane, wearing a blue hoodie.

The film also shows at length the work of diplomatic advisers, from preparing Macron’s speech to texting during his phone calls with world leaders.

In a surreal moment just before the war, Macron’s aides manage to salvage a possible billion-euro contract for French railway giant Alstom by sending a last-minute handwritten note to the French president as he meets Zelensky in Kyiv.

Lagache said he was careful not to divulge any classified information. No specific details about France’s military support for Ukraine appear in the documentary.

Nor does it show the discussion between Macron and Zelenskyy after the French president made comments that annoyed Ukrainians about not humiliating Russia.

The documentary highlights the coordination of European leaders to support Ukraine and impose unprecedented sanctions on Russia.

The camera follows Macron with German Chancellor Olaf Scholz and Italian Prime Minister Mario Draghi on the train en route to Kyiv in mid-June, where they pledged arms and backed Ukraine’s bid to join the EU. ‘European Union. The leaders traveled to nearby Irpin, a suburb where scores of civilians were killed, with Macron claiming to have seen signs of “war crimes”.

“What matters to me is to try to be useful, and to ensure that the conflict does not spread, that Ukraine can stop it and regain control, and that the Europeans remain united,” Macron said on the way home. “There’s still a lot to do. It’s not over.”

Jeffrey Schaeffer in Paris contributed to it.