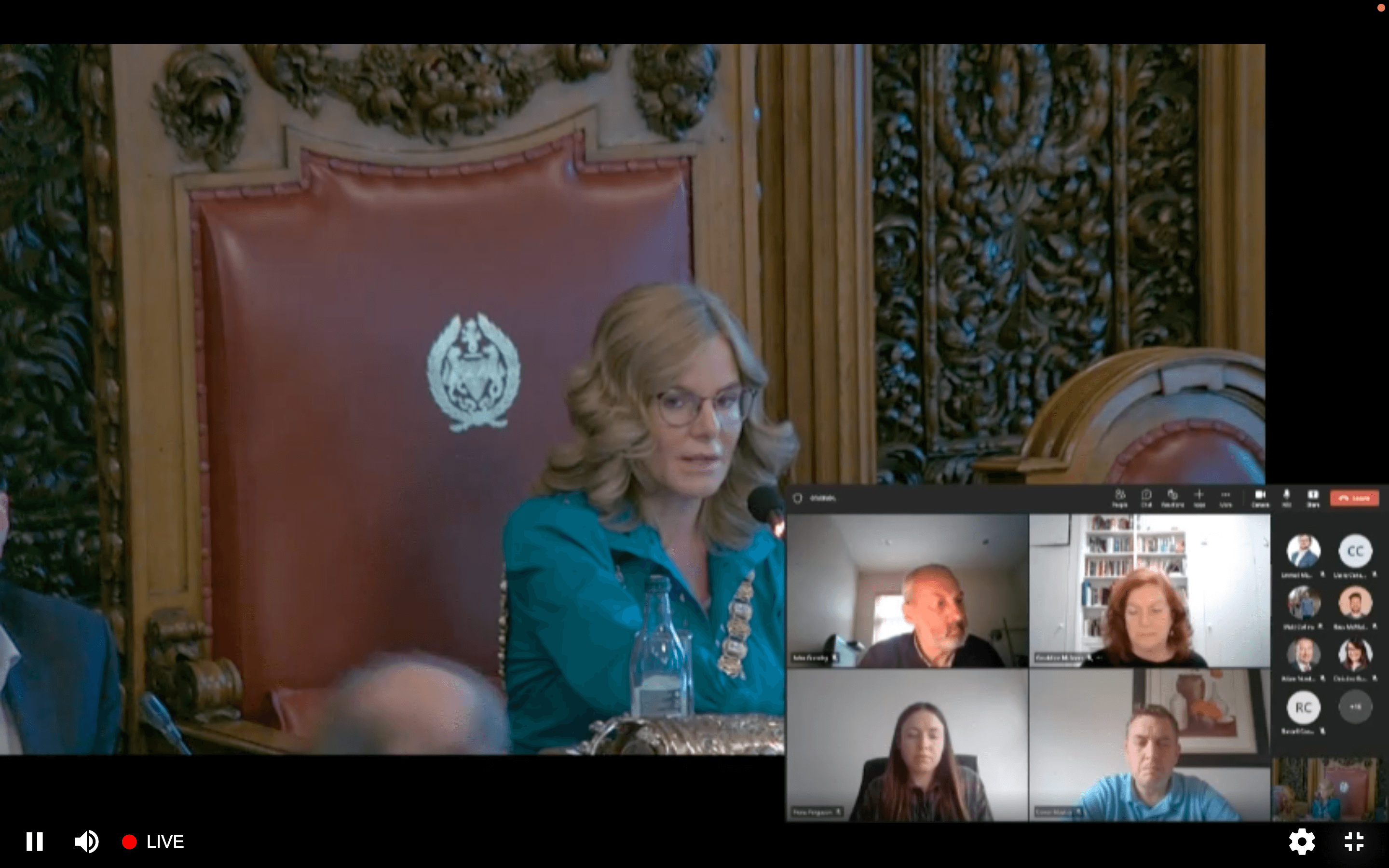 Belfast City Council’s monthly JULY meeting began on a somber note as parties across the House offered their condolences to former Sinn Féin councilor Stephen Magennis on the recent death of his wife, Patricia.

Councilor Arder Carson, who is a close friend of the family, paid a particularly moving tribute to Patricia and Stephen, who he said were dedicated in their love for each other and their children.

Green wins tonight on the board.

Regarding the long-standing issue of erecting bilingual signage in Clifton Street, DUP Councilor Dale Pankhurst said the signage failed to meet the approval threshold of 66% of residents local.

In response, Alliance adviser Michael Long quickly reminded him that the threshold had risen to just 15% approval and that the signage needed to be approved. After a vote, 39 councilors voted for and 14 against, which means that bilingual signage will be erected.

Moving on to the People and Communities Committee Minutes and there was praise for a recent Cleanup Task Force meeting. However, councilors across the House agreed there was a lot of work to be done to improve the town centre.

UUP Councilor John Kyle then hailed a major improvement in addressing antisocial behavior issues around Belsonic this year, but said there was still work to be done. He praised the organizers for their commitment to tackling some of the issues affecting local residents.

Another UUP councillor, Alderman Jim Rodgers, expressed disappointment at the lack of progress in finding a site for a new cemetery in the city and said he wanted to see action on the question.

Moving on to the minutes of the city’s growth and regeneration committee and a row over Belfast City Council’s participation in MIPIM 2023, a real estate market event in the south of France. Green Party Councilor Áine Groogan asked the Council not to get involved in the event.

Cllr Groogan argued that the “unscrupulous developers” offered no benefit to the city and accused the event of “blatant misogyny”. His comments were supported by People Before Profit advisers.

We are therefore challenging the economic orthodoxy that has left this town as it is and will instead take a trip to the south of France to sell our wares to the highest bidder. https://t.co/M41CaRJKPn

SDLP councilor Carl Whyte said the conference was not an “apocalyptic” event and was certainly not “male dominated”. DUP adviser Dean McCullough took aim at objections from People Before Profit and the Green Party. Green Councilor Mal O’Hara hit back at his comments, saying his party was misrepresented.

A vote to send only council officers and not elected representatives to the event was defeated by 32 votes to 19.

Cllr Groogan’s proposal for the Council to boycott the event was defeated by 25 votes to eight with 18 null votes.

Green Party Councilor Brian Smyth then welcomed the September installation of cycle parking facilities in Victoria Square and Castlecourt. He said he hoped they would be the first in a long line to appear across town.

There was only one motion on the agenda to raise on Monday evening, proposed by Deputy Mayor Councilor Michelle Kelly on the continuation of hybrid meetings.

“This Council supports taking action to encourage a broader demographic to run, get elected and stay on as local councillors,” she said.

“He recognizes that hybrid meetings allow easier participation of people with young families and caring responsibilities and people with disabilities, among others, therefore, they are more likely to consider elected roles.

“The Board therefore supports maintaining a mix of online and in-person access to meetings.

“Notwithstanding the outcome of the Communities Department’s recent call for evidence on remote/hybrid meetings, the Board will write to that Department expressing its desire to be able to continue to hold full Board and committee meetings in a hybrid form.”

Once the Board accepted the motion, the July monthly meeting ended.

Do you have anything to say on this issue?
If so, why not send a letter to the editor via this link?

Will the EU go it alone?