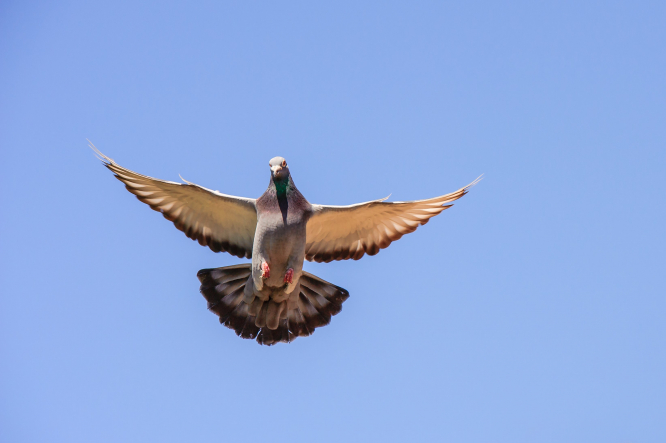 Thousands of racing pigeons taking part in an international competition are still missing after becoming disoriented while flying over France, possibly due to a storm near where they were released.

The 26,000 birds in the race were released into the sky over Narbonne (Aude) heading for Belgium.

The Belgian pigeon association l’Indépendante de Liège organizes and supervises the international event each year with the participation of representatives from Belgium, Luxembourg, Germany, the Netherlands and France.

On the same day (Friday July 29), about 30 km from the starting point, a thunderstorm was brewing – which organizers said confused many birds. Some landed in Germany, far from their intended destination, but many others simply disappeared from radar.

Lost birds represent a significant financial loss for many participants, amounting to several thousand euros, especially if their birds come from a good line and have been trained for two or three years.

Some criticize the race organizers for not having canceled the race because of the storm.

Jef Cupers, of the pigeon association the Belgian Pigeon Federation, told Belgian news: “The fault lies with the Indépendante de Liège. We still don’t understand why they released the pigeons. This disaster will have consequences. Surely they will not be able to organize flights next year.

But the association’s president, Pascal Bodengien, told Belgian television that the situation was an “emotional and financial tragedy” and that it was simply “very sad”.

A Belgian, however, was happy: Joseph Liégois won the competition in the “old birds” category, after his pigeon came first, having successfully covered 817 kilometers in 12 hours.

Away from the race, one of the pigeons was even found by a couple vacationing on a sailboat off Sardinia.

Marc and Christine Gauthrot from Leucate in Aude picked up the pigeon the day after the release.

Mr Gauthrot told France 3: “Late in the evening, it was almost dark. We saw this bird trying to land on the boat. Five attempts and it fell on a mast bar. He stayed there for a long time before coming back down to the deck.

The couple had heard of the information race and quickly contacted the French pigeon federation to report the bird, who said its registration number showed it was a German pigeon. The couple wrote to the German federation, but have so far received no response.

The couple said: “We would like to find his owner or at least someone interested in this pigeon in Sardinia.” They joked, “We will demand a ransom!

During this time, the couple feed the bird with bread and offer it clean water to drink. They said, “We could go diving or get off the boat, but [the pigeon] find us, no matter where we are!

The couple hope to quickly find the owners of the bird, before they leave the port of Sardinia and return home. The pigeon would probably not survive the return trip due to its exhausted state and the long distances involved.

The French army carrier pigeon platoon is unique in Europe

How to keep noisy and messy pigeons away from our French garden?