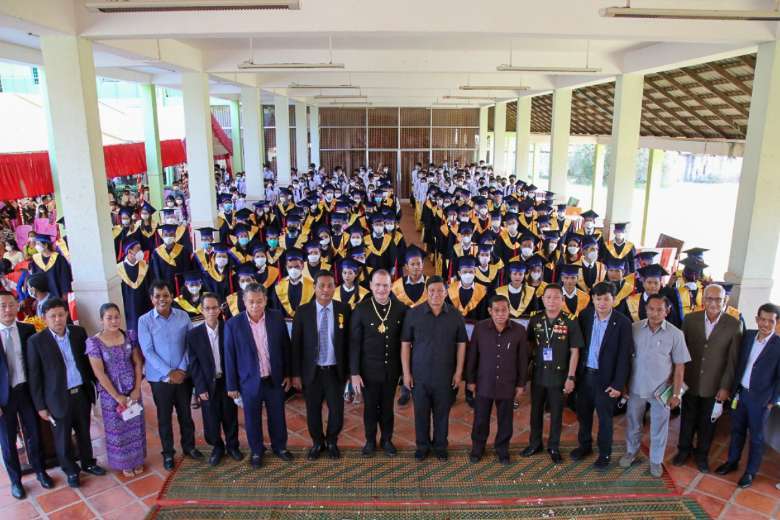 Cambodia pays tribute to a French bishop for social development

The Cambodian government has honored French Bishop Olivier Michel Marie Schmitthaeusler with a prominent national award in recognition of his pioneering efforts in social development.

Msgr. Schmitthaeusler, 51, member of the Society of Foreign Missions of Paris (MEP) and Apostolic Vicar of Phnom Penh, received the medal of the National Order of Merit on March 8 from the hands of the Minister of the Environment Say Samal and of the governor of Takeo province, reports MEP magazine Asian churches (Churches in Asia).

The ceremony took place at the church-run St. Paul Institute in Takeo province in southern Cambodia near the Vietnamese border, attended by 114 students who graduated from the school this year. It also marked the start of the school’s new academic year.

keep up to date Don’t miss the latest news

Minister Samal congratulated the Bishop on being nominated by King Norodom Sihamoni of Cambodia for the title Aekoudom (Excellency).

He said the award was a recognition of the Church’s commitment to social development in the areas of education, art, culture, social work and health care, especially for the community of Takeo province.

He also commended the leadership and staff of St. Paul’s Institute for their dedication to providing excellence in student education over the past 12 years.

Archbishop Schmitthaeusler said the honor was recognition of all that the Catholic Church had accomplished over the past 20 years in Cambodia.

The late King Norodom Sihanouk of Cambodia created the Grand Order of National Merit in 1995 to honor Cambodians and foreign citizens for their outstanding service to the nation.

Archbishop Schmitthaeusler said the honor was recognition of all that the Catholic Church had accomplished over the past 20 years in Cambodia.

“These national decorations are not the result of my own merit. They are for all of you, teachers, educational agents, artists, collaborators and leaders at the service of all these projects of integral development, integration, harmony and peace of heart. May God bless our big family!” said the prelate.

Bishop Schmitthaeusler was born on June 26, 1970 in Strasbourg, France. His father was ordained a permanent deacon when he was 16.

At 19, he joined a major seminary in Strasbourg and then moved to Japan, where he taught French at the Catholic University of Osaka.

He returned to France to complete his studies and joined the MEP in 1998. He was ordained a priest the same year and within a few months he was sent to Cambodia as a missionary.

At this time, the Catholic Church was reborn from its ashes after the end of the brutal civil war in Cambodia. MEP missionaries have played a vital role in the resurgence of the Church in the country.

He established St. Francis Vocational High School to provide vocational training for poor and disadvantaged children from rural families in the largely agrarian province of Takeo.

Father Schmitthaeusler studied local languages ​​and was appointed parish priest of Kampot Takeo, a southern rural area covered by the Vicariate of Phnom Penh, in 2001. At that time, the community had only one baptized Catholic family. The efforts of the young priest attracted more people to Catholicism and there are currently 350 Catholics in Our Lady of Smiles parish in Takeo province.

In 2002, Father Schmitthaeusler was appointed director of the diocesan commission for education. He established St. Francis Vocational High School to provide vocational training for poor and disadvantaged children from rural families in the largely agrarian province of Takeo.

He then founded the Saint-Paul Institute, the Peace Center and the Peace Village. He also became involved in social work by creating the John Paul II Center for Life, which mainly takes care of the families of AIDS patients.

He also paved the way for a silk weaving workshop around the Church of Our Lady of the Smile, whose colorful frescoes depicting biblical scenes were painted by a Buddhist artist.

In 2009, the missionary completed the construction of St. Paul’s University Institute in Angtasom, 60 kilometers south of Phnom Penh, to better train his students in agriculture, IT, English literature, social work and tourism.

He was appointed vicar general of Phnom Penh in 2007, then secretary of the Cambodian Episcopal Conference in 2008.