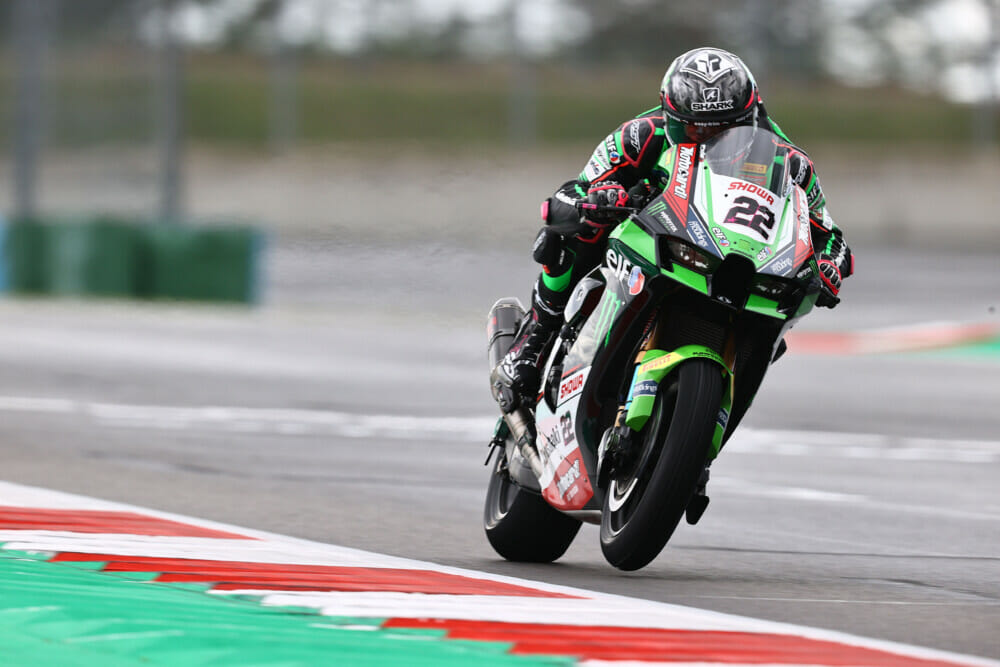 A strange day of changeable weather greeted the WorldSBK riders after their long summer break. The best times were set in the early laps of FP1 – just before the rains got too heavy for anyone to improve. While the wet conditions again came at a bad time for most drivers in FP2, Alex Lowes (Kawasaki Racing Team) thus found himself the fastest driver, thanks to his performance in FP1 and a lap of 1’39.107.

In the wet conditions of the afternoon FP2 session, Jonathan Rea (KRT) was fastest, but only 19th overall as he never had a dry track to work on in FP1 or 2 – as many other WorldSBK riders.

Alvaro Bautista (Aruba.it Racing – Ducati) finished fourth fastest in FP1 but crashed in the wet conditions of FP2. The championship leader recovered and left in wet conditions, taking advantage of his first time in FP1 for his fourth place overall.

Just to complicate matters further, there was a red flag 22 minutes into FP2, due to debris from a crashed bike lying on the track surface. The session was quickly restarted, but still in largely wet conditions.

Better weather conditions are predicted for Saturday and Sunday, making FP3 a particularly important time for everyone ahead of Superpole qualifying.

Local driver Valentin Debise (GMT94) proved to be the fastest driver on Friday in his home round at Magny Cours, making the most of the slowly drying track conditions in FP2.

Fast rookie Adrian Huertas (MTM Kawasaki) was fastest of all in FP1 in all-wet conditions and then fourth overall.

After announcing his retirement at the end of this season, Jules Cluzel (GMT94 Yamaha) finished sixth on Friday at Magny Cours.

The weather conditions should improve as the weekend progresses, after a difficult Friday on an ever-changing track.

Luxury real estate: Why this $16 million mansion in California was cut in half